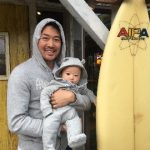 [Profile]Graduated from Duke University in the US in 2008 during the Global Financial Crisis and so naturally I decided to start my career by joining Citibank Singapore, in the offshore wealth management in the retail banking segment. I spent 10 years there in roles ranging from Fixed Income Product Management to most recently a Senior Consumer Sales Manager running a sales team of 25 staff. Throughout my career, I remained active in the Singapore Army and am proud to serve as an officer in our military reserve armed forces. In Aug 2018, I moved here to Japan with my wife and infant son to pursue my MBA at Waseda Business School.

Who is Prof. Maki?
That was the one question I had coming out of Phil Wickham’s Venture Capital Formation fall intensive course. Since VC Formation was already reviewed earlier in this STE Relay Column, I will just say that class absolutely convinced me that it was worth coming to WBS. Phil repeatedly emphasized the importance of human relationships in the VC world, and even once mentioned “We’re here in Waseda only because Prof. Maki is here. If he was in Keio, then well, this would be in Keio”. With that powerful of an endorsement, when Prof. Maki sent out an open recruitment for a Teaching Assistant position for his Science, Technology and Entrepreneurship (STE) class, I was not about to let such an opportunity pass me by.
It would be easy to talk about Prof. Maki’s class from a content perspective, but there’s a syllabus that’s available on his website that describes in detail each reading and lecture. Instead, I thought it might be more interesting to write about this class from an organizational or structural perspective, commenting on the structure, vision and alignment of assessment (incentives) and the challenges that followed.

It’s unfortunate that we tend to be obsessed with grades as an absolute indicator of achievement, ability and knowledge, especially here in Asia. It feels like that should hardly be the purpose of higher education, to simply acquire a certification or qualification to add to your CV. So, it was surprisingly refreshing to hear Prof. Maki’s initial guidance to his STE 2019 class. This class would be entirely focused on academic research in the area of Science, Technology and Entrepreneurship, but it would not be a lecture style class. Instead, each research paper discussion would be preceded by a student presentation summarizing the research question, findings, methodology and implications, with Prof. Maki only interjecting to share his insights or clarify a point of understanding and later facilitating the discussion. In such a way, the quality of this class would be determined by the students themselves, the extent of learning dictated by the extent to which the class could elevate itself to a higher level of intellectual curiosity, everyone would be a co-creator and collaborator in this unique classroom environment.
The class appeared to be taken off-guard initially, with students questioning the wisdom of assignments and presentations graded based on a binary scale of effort (i.e. completion or not). It appeared to be such a departure from commonly accepted assessment metrics that someone asked what was to stop a student from just going through the motions and putting up a low quality presentation, how could that be graded on the same basis as someone who put in the effort to produce a higher quality presentation, effectively suggesting that the class would eventually sink to the lowest common denominator. Prof. Maki’s response was succinct, a single word – “Pride.” He did go on to elaborate that it was pride in ourselves, pride in our reputation and capabilities, pride in not letting the class down by producing substandard work. Grades on an effort basis afforded students the freedom to take risks and throw down challenges rather than to take the safe, conservative route which leads only to a rehashing of conventional knowledge.
Grades would still have to be assigned at the end given it is an institutional requirement, but it would be the quality of comments provided by students in their feedback forms submitted after class that would be the point of relative distinction. This seemed fair, given it showed how much someone absorbed or learned from the class and it showed the incentive structure (assessment) was well aligned with the overall objectives of the class.

The 2019 STE Class was unique in that it was a joint class with Prof. Sumikura and his class at the National Graduate Institute of Policy Studies (GRIPS) in Tokyo, who would join in via Zoom (a web conferencing service). The other aspect was that the Waseda-Nanyang Double MBA student cohort was also enrolled in this class as part of their core curriculum. As a result, this class consisted of three distinct groups of students (GRIPS, Waseda-Nanyang, Waseda International MBA) and it played nicely into the class dynamics contributing towards the Learning objective.
It is said that one of the best ways to learn is to try teaching the subject to someone else, and in this class, student presentations are effectively that. However, presenting among friends is very different from making a presentation to people you are unfamiliar with. Most people will generally be more prepared or put in more effort in a presentation where an unfamiliar person will likely be forming an impression of you. We just naturally want to leave a good impression. Coupled with the natural group dynamics of different graduate programs, nobody wants to be the person who lowered the reputation of their respective programs in the eyes of the others. It creates a virtuous cycle of constantly and implicitly pushing each other to do better with each progressive presentation.
All learning environments need to walk a balance of openness (“There are No stupid questions”) and pushing the class to push past their intellectual boundaries by placing them in slightly uncomfortable situations where they need to prove their credibility. Coming from a Consumer Banking background and running a rather junior sales team, I am well familiar with the need to have your staff feel that they can ask you anything they are unsure about, and yet also needing to set standards on their base level of competency (“You should know this”). I felt that this class achieved such a balance, but it was by no means a chance event. This could only happen through a well-thought out structure to achieve the main objective of guiding the students towards creating their own learning environment.

I think one of the main operational challenges of this class was how do we foster an inclusive environment where the GRIPS students can feel like they are an active part of our class rather than just observers as it usually happens with livestreamed classes. This was both conceptual and logistical, even down to should the camera angle be facing the students so GRIPS students could place faces to the voices speaking, or should the angle be from the back of the class, where they may have a better view but would feel like observers rather than participants.
We chose inclusiveness, so a student-facing camera angle was chosen. However, Prof. Maki’s propensity for using the white board meant periodically shifting the camera view between the white board and the class, which could be distracting or disruptive. We also needed a way for them to engage in the discussion in an effective and efficient way. To solve these issues, we used portable white boards and a 2nd webcam, and to solve the engagement issue we turned to Sli.do, which allowed us to create real-time online Q&A sessions where both WBS and GRIPS students could highlight questions that could be viewed by all parties and addressed in class.
My point here is not to highlight these solutions as brainwaves of sparkling insight, but rather to provide an example to illustrate the point that there is a significant amount of thought that goes into every single aspect of the operational and structural design of a class. In a way, it’s like the Japanese concept of Omotenashi, which is hospitality that is perceptive, intuitive and well-considered from the guest’s perspective. The smooth operation of a class like this, involves a myriad of small decisions that may not be immediately noticeable but if it were different, something would just seem a little bit off. It is the intangibles that set us apart especially in the consumer business world, where we compete in every customer experience, every touchpoint, every possible area of engagement to deepen that relationship. I was proud to have the opportunity to work with Prof. Maki, to observe and learn how he ran this class, and was glad to have been able to contribute to this.